LaBrenda Garrett-Nelson focuses on African American families with roots in the South, primarily the Carolinas, and she gets a great deal of personal satisfaction from helping families with slave ancestors to recover their lost histories. As a result she considers herself a genealogist with a mission: to research, write, and lecture to inspire descendants of African American slaves to document their family histories, and to raise the consciousness of all Americans about the contributions of these ancestors. 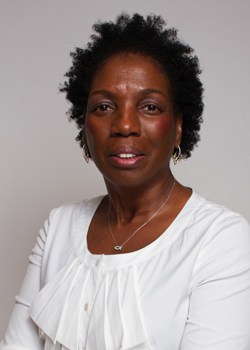 To ensure that she had the skills and the knowledge to do this critical and difficult work the right way, she decided to work towards the Certified Genealogist credential, a goal she achieved just a few weeks ago.

LaBrenda is a graduate of John Jay College of Criminal Justice, City University of New York, and holds both a law degree and a Master of Laws degree from New York University. She spent most of her 35-year legal career as a corporate tax attorney, including five years on the staff of the nonpartisan Joint Committee on Taxation of the U.S. Congress.

No newcomer to genealogy, she had authored and privately published three editions of her family history (The Source: The Garrett, Neely, and Sullivan Families) and was the principal writer and editor of two church histories documenting their founding African American families while still in active law practice. But, LaBrenda said, even with her legal training, she made many of the mistakes of a novice genealogist. While her background gave her the needed analytical and writing skills, she didn’t fully realize just how much she had to learn about genealogy until she enrolled in the online certificate in genealogical research program offered by Boston University.

After completing the Boston University program, she immersed herself in genealogy, beginning with ProGen Study Group 13. That’s where she came into contact with her genealogy hero: Sandra MacLean Clunies, CG, who served as the mentor of that group during and even after the group’s 18-month study program. It was Sandy’s encouragement that led LaBrenda to enter the 2013 International Society of Family History Writers and Editors (ISFHWE) Excellence-in-Writing Competition, where she took first place for unpublished material by published authors. Her winning article, “Searching for the Slave Owners of Isaac Garrett: Expanding Research Beyond Online Sources,” was published in the June 2014 issue of the ISFHWE quarterly, Columns.

She also attended the 2012 session of the National Institute on Genealogical Research (NIGR), and joined the GenProof 25 study group to gain a solid grounding in basic genealogical methodology. In addition to formal courses of study, she joined genealogical organizations that offer online tutorials and/or journals or newsletters, and attended national and local conferences where she could ask questions of established experts, and she noted how impressed she was with “how extraordinarily generous members of the community are with their time and knowledge.” She singled out Thomas W. Jones, PhD, CG, CGL, whom she first met through the Boston University program, and noted that the speakers at the annual National Genealogy Society conference were uniformly excellent: “Elizabeth Shown Mills, Judy Russell, Michael Hait, and Reginald Washington have never disappointed.”

She found conferences valuable to network with other genealogists, and learn more about her area of interest. When she started thinking about certification, LaBrenda made sure to attend online and in-person sessions that discussed the BCG requirements. Along the way, she picked up one of the best pieces of advice for anyone looking to achieve certification: “use your own family for the kinship determination project.”

She also turned again to her mentor Sandy Clunies, and it was Sandy’s feedback that proved invaluable in helping decide she was ready to begin the BCG certification process. LaBrenda emphasizes, though, that being ready to do the work and being ready to start the BCG clock can be two different things. While she’d reviewed the projects she wanted to include in her portfolio before filing her preliminary application, she hadn’t done any of the work and found herself pressed for time as the one-year deadline approached. So a key piece of advice for others is not to take that one-year time frame too literally: “It’s better to do as much preparation in advance as you reasonably can,” she said. “Limiting myself to that one year time frame wasn’t realistic, and certainly made the process harder than it needed to be.”

That experience doesn’t change her overall view however: “the certification process itself was worth doing because it sharpened my skills, particularly my facility with the citation forms and numbering system.”

She hopes to use those newly-honed skills to publish scholarly articles and lecture in her area of interest and to prepare to renew her credential in five years.

LaBrenda divides her time between Washington, D.C., where she has lived since 1982, and Laurens, S.C., where she maintains a residence on land that was once part of her Garrett great-grandfather’s farm. She is married to Paul Nelson, an ordained Baptist minister, and is the mother of a daughter who works as a journalist in New York City. In her “spare time,” she serves as a member of the board of trustees of the John Jay College Foundation in New York.