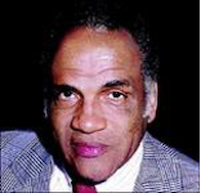 Mr. Sluby was the first board-certified African American genealogist, having been approved by the Board for Certification of Genealogists in 1973.

In 1977 he joined with others to found the Afro-American Historical and Genealogical Society, Inc. (AAHGS) and was its first vice president for genealogical programs, a role he filled until 1981. He also served as AAHGS Newsletter editor (1977–1981), treasurer (1981–1983), and executive secretary (1981–1983). AAHGS named one of its two meritorious achievement awards in his honor. He also served as a director of the National Genealogical Society from 1978–1980.

Mr. Sluby was a District of Columbia police officer from 1961 until his retirement in 1980 from the helicopter branch. An Army veteran, he served from 1954–1957, receiving his basic training at Fort Knox, Kentucky, and military police training at Camp Gordon, Georgia. He served with the 385th Military Police Battalion at Stuttgart, Germany. In addition to his interest in genealogy, he was an avid racquetball player. A resident of Maryland at the time of his death, he is survived by his wife Patricia Carter Sluby, PhD (also a genealogist) and three children from an earlier marriage: Paul Jr., Thomas, and René Sluby.

Applications for scholarships for African Americans to participate in national genealogical institutes are due annually on 15 March. Scholarships will be awarded to up to three African American students, to cover up to $1,700 of the tuition, travel, and lodging expense of attending one of five premier national institutes. BCG will also waive its final application fee of $300 for scholarship recipients who submit portfolios of work to be considered for certification within three years of the announcement of an award.

Applicants are required to submit an essay and a sample of their genealogical research. Scholarship recipients will be awarded in May, so that recipients can take part in institutes scheduled for the following year. Those wishing to apply should fill out the required application form (available in the PDF Library) and submit with supporting materials as required to office@bcgcertification.org.

The five institutes eligible for scholarships for tuition, travel, and lodging expenses (where applicable) are:

Applicants can be of any age, but should exhibit intermediate or higher skills that have prepared them for an in-depth learning experience. There is no age limit or income requirement.

Download application form here and submit with the supporting materials to office@bcgcertification.org.

Page load link
We use cookies on this website to ensure that the site will work properly on your web browser together with improving the site’s performance. If you click "Yes, I agree," you are agreeing to our use of cookies. Yes, I agreeNoPrivacy Policy
Go to Top