Report from Day 2 of the 50th Anniversary Lectures

Report from Day 2 of the 50th Anniversary Lectures 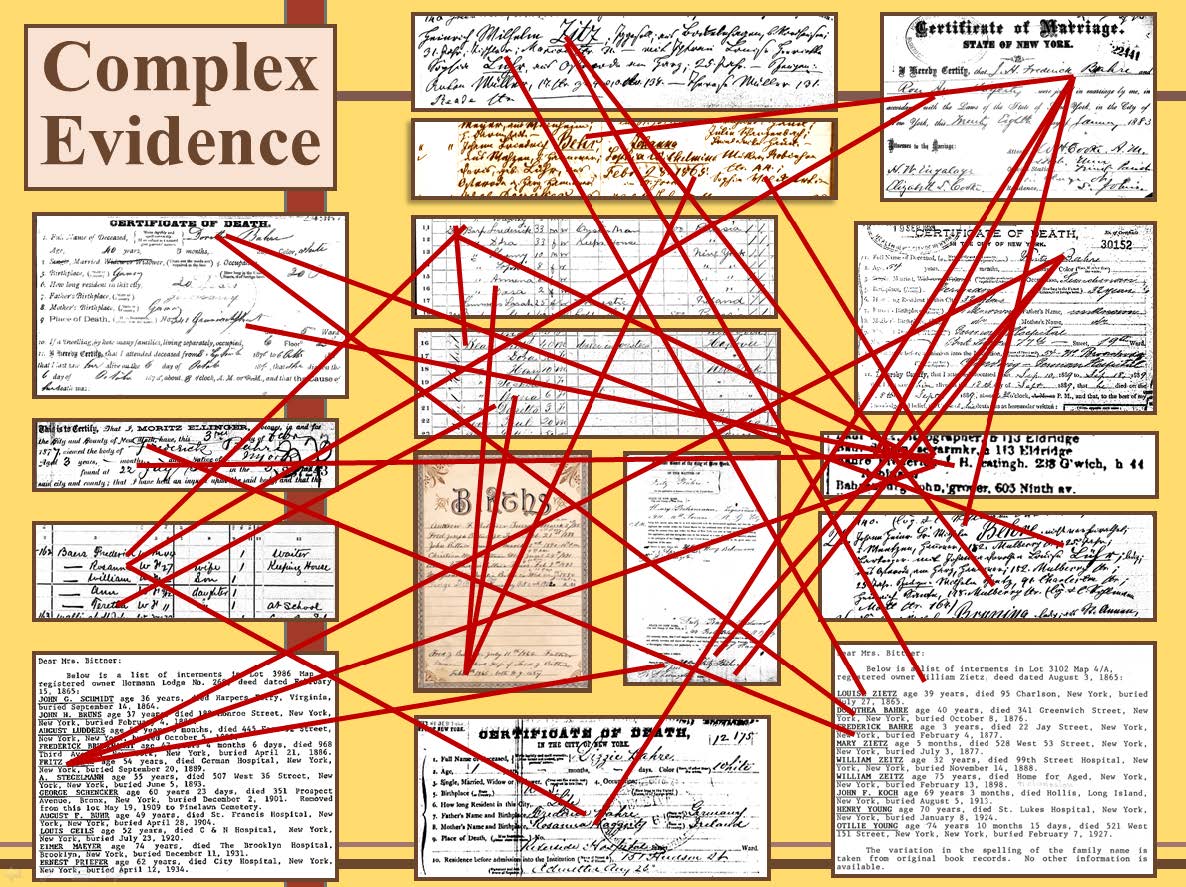 Sometimes you can’t prove parentage by citing a single document to a line on a pedigree chart. Copyright © 2013 Warren Bittner, used with permission.

Day two started early with two presentations by F. Warren Bittner, CGSM. His first, “Complex Evidence: What It Is, How It Works, Why It Matters,” gave me my favorite quote of the lecture series:

It’s not the quality of the source (original, primary, direct); it is the comparison of the sources that leads to proof.

Warren was impassioned in his message “Proof Arguments: for the Next Generation.” He presented a complex evidence case in which no single record was sufficient to prove the parentage of Minnie. It took a network consisting of her death record, her marriage record, her baptism record, and her parents’ marriage record to supply all the data. But her name differed on every record. So did their names. They lived in different addresses in Greenwich Village, New York City, for every record. Could we be sure we had the right woman and her correct parents? A family group sheet supplies only birth, marriage, and death data spaces. A well-written proof argument for Minnie’s parents names gives much more satisfaction. Warren walked us through the construction of the proof argument.

Dave McDonald, CGSM, gave us a hands-on workshop for his presentation “Reach for the Power Tools: Record Transcription and Analysis.” His power-of-attorney document from the Wisconsin Historical Society was executed in Illinois by a man from Massachusetts. It appointed his brother to dispose of a one-seventh share in their mother’s dower rights. Attendees transcribed it, abstracted all the information, extracted important data, postulated a research question, and developed a research plan. It was a great discussion.

Judy G. Russell, CGSM, CGLSM, discussed “Bringing Josias Home: Using Circumstantial Evidence to Build a Family.” She took Josias from his residence in Texas to his origins in North Carolina. Her exhaustive research in Texas produced information that they had lived for a period in Indiana. In Indiana, carefully researching associated families, she found a record that suggested research in Burke County, North Carolina.

Elissa Scalise Powell, CGSM, CGLSM, presented “Baker’s Dozen Steps to Writing Research Reports.” After reviewing the elements needed in a report she brought us on a methodical walk through the report-writing process. Her practical approach made the process straightforward.

Board for Certification of Genealogists Sponsors 2023 Free Webinars

The Board for Certification® Announces Two New Scholarships