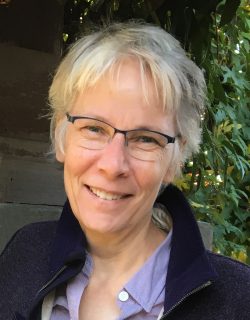 Alison Hare, CG, has continuously maintained her certification since 1999. For over a decade she has worked for BCG behind the scenes. In 2008 she was appointed as BCG’s Judge Coordinator, a role she filled for ten years. From 2009 to 2018 she served as a trustee. Because BCG judges are anonymous, Alison’s service received no public acknowledgment. Working as a full-time volunteer for BCG left her little time to pursue her own genealogy career.

During her tenure as Judge Coordinator Alison facilitated improvements to BCG’S judging system. Her first major accomplishment was implementation of rubrics for portfolio evaluation—a ‘game changer’ for both applicants and judges. The rubrics had been developed several years previously but had not been put into effect. Alison developed the supporting infrastructure, coached judges in their use, and monitored evaluations to improve results.

During her decade as Judge Coordinator, Alison mentored more than forty new judges as well as provided guidance to senior members of the judging pool. She developed curricula for and led five day-long judges’ training meetings, and oversaw and strengthened the Review Committee.

Alison’s writing and editing skills honed as a journalist and editor have served BCG well. She produced a judging procedure manual, guidelines for evaluation comments, and a renewal manual still in use. She revised The BCG Application Guide five times between 2011 and 2017 and rubrics numerous times to improve clarity. She wrote OnBoard articles explaining BCG’s evaluation system and standards for continuing education. She served on the standards revision committee leading to the publication of Genealogy Standards (2014). More recently she worked on the ad hoc DNA standards committee tasked to produce the improved DNA standards approved in 2018, leading to the 2019 revision of Genealogy Standards.

Alison’s interest in genealogy began in the early 1980s when she discovered a gravestone in a family cemetery for an ancestor named Busteed Green. She was determined to learn more. “Had Busteed been less elusive and less uniquely named,” she said in her January 2009 OnBoard Spotlight profile, “I probably would not be a genealogist.” BCG owes a debt of gratitude to Busteed for sparking Alison’s interest. It is now time to recognize Alison’s tremendous impact on BCG with the Donn Devine Award for Extraordinary Service to the Board for Certification of Genealogists.

The Donn Devine Award was presented to Alison Hare on 10 May 2019.