Michael J. Leclerc has been involved in the field of genealogy for better than two decades. He worked for seventeen years at the New England Historic Genealogical Society before moving to his present position as Mocavo’s Chief Genealogist. Amassing decades of practice was the best thing he did to prepare for certification, according to Michael, who says he believes that “one needs a certain level of experience to be best prepared for the process.”

Born and raised in New England, Michael has called the city of Boston his home for more than twenty-five years. Both his paternal and maternal ancestors are French Canadian. His grandparents and great-grandparents immigrated to New England. 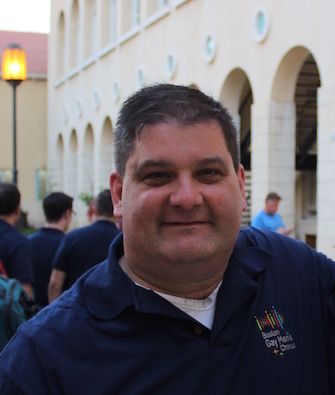 Michael’s greatest passions are music and genealogy. As a member of the Boston Gay Men’s Chorus, he has had the opportunity to travel in America, Europe, and the Middle East. His work in genealogy has taken him throughout North America, the Caribbean, and England. “I’ve always been interested in history,” he exclaims. “Genealogy is one way of bringing history down to the personal level. It allows me to look at history from a different angle. Also, I’ve always been a bit of a mystery buff, and genealogy is just an endless series of mysteries. Every time you find one answer, you create two new mysteries.”

Two such mysteries comprise Michael’s most stubborn brick-wall problems. One involves his research on a young man in his own family who was carried captive from New England to Quebec during the Colonial Wars. The other stems from his research on Benjamin Franklin’s family. Michael has been frustrated in attempts to identify the given name of one of Franklin’s nieces. He explains that the niece “does not have a first name in her birth record. In a letter written by the niece’s sister to Benjamin, she makes reference to the unnamed niece and that niece’s son, a ship captain in Wales. And the estate of Benjamin Franklin gives me the niece’s married surname: ‘Games.’ Unfortunately, I have no first names for the niece, her husband, or her son. And this little area of Wales is ground zero for that name.”

Teaching others about genealogy is one of Michael’s favorite genealogy-related activities. “Seeing the lights go on in someone’s eyes when they finally figure out a concept that they can apply to their own work and break down their brick walls is so much fun,” he reveals. He also enjoys writing, and he stresses that “having . . . work published is the best way to be certain that it will be there for future researchers to find.” Michael appreciates opportunities to explore new ground—different time periods, locations, and ethnic backgrounds that let him “start all over and learn from scratch.”

Michael submitted his portfolio after having extended the clock several times. He confesses that if he were starting again, he would have submitted his preliminary application only after having the major components of the portfolio complete or nearly complete. He found the client report challenging, as he has not conducted research for clients in some time, but the most difficult aspect of the application process for Michael was editing his own work. Being forced to work on his portfolio alone, he says, “illustrated . . . how collaborative I am in my work.”

Michael says he “draws inspiration from people,” including genealogists Gary Boyd Roberts, Paula Stuart-Warren, Jim Warren, Cyndi Ingle, Henry B. Hoff, and Patricia Law Hatcher. He counts Donald Lines Jacobus, John Insley Coddington, and the Holmans, genealogists who “did so much in the twentieth century to introduce quality research and standards to the field,” among his genealogical heroes.

He also draws strength from the words of others. Michael’s college band director taught him a Teddy Roosevelt quote that is still a source of encouragement:

“It is not the critic who counts; nor the one who points out how the strong person stumbled, or where the doer of a deed could have done better. The credit belongs to the person who is actually in the field . . . Far better is it to dare mighty things, to win glorious triumphs, even though checkered by failure, than to rank with those poor spirits who neither enjoy nor suffer much, because they live in a gray twilight that knows not victory nor defeat.”

In the coming years Michael hopes to continue writing and teaching about genealogy, adding “. . . if I am doing this while moving between homes in Boston, midtown Manhattan, and London with a fantastic husband, I wouldn’t object!”

“I like to think that between music and genealogy, I am leaving the world a bit better off than before I was here,” he said. “Life is too short. We need to do our best, reach, stretch, and soar. Don’t let people knock down our dreams and ideas. As Helen Keller said ‘Life is either a daring adventure, or it is nothing.’ ”

Michael may be reached at michael@genprof.net.

CG and Certified Genealogist are service marks of the Board for Certification of Genealogists, used under license by Board-certified genealogists after periodic competency evaluation, and the board name is registered in the US Patent & Trademark Office.