We’ve seen in earlier posts what genealogical proofs look like in a narrative and a footnote. A list, bulleted or numbered, is another effective way of presenting the proof that supports a conclusion.

Proofs in list format are clean, concise, and easy to follow. All the data is assembled in one place, and the correlation is obvious.

Standard 53 (can’t escape it!) offers a list as one of the options for a proof summary when the evidence is direct and the conflicts minor. “Proof summaries . . . may appear in a broader context—for example, within an article or case study, a narrative family history or monograph, or a report for a client, court, or personal files.” [1]

Here’s one by Harold Henderson, CG, that appears as part of an article.[2]

The list correlates data from a number of sources to show that Elizabeth Porter of the Midwest was the same person as Elizabeth Bassett from a New York family record. Once Harold establishes Elizabeth’s identity, he continues his argument for her being the daughter of a man whose probate petition didn’t include her, but by law should have.

Each bullet point describes evidence of relationships between Elizabeth and her siblings (all named in a family Bible record) and between her children and extended family. Note 1, mentioned in footnote 7, below, refers to the Lewis Bassett family record as found in his wife’s Revolutionary War widow’s pension file. 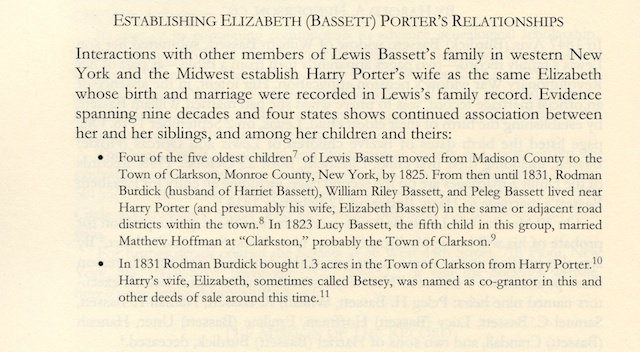 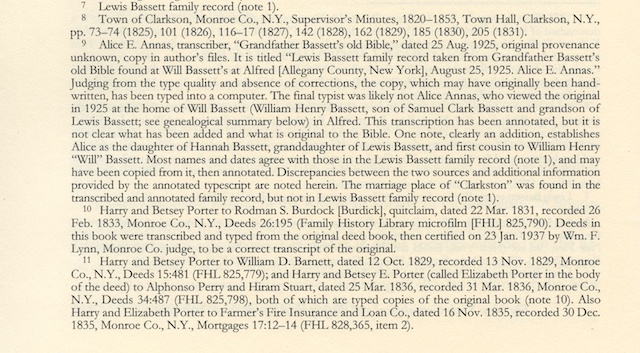 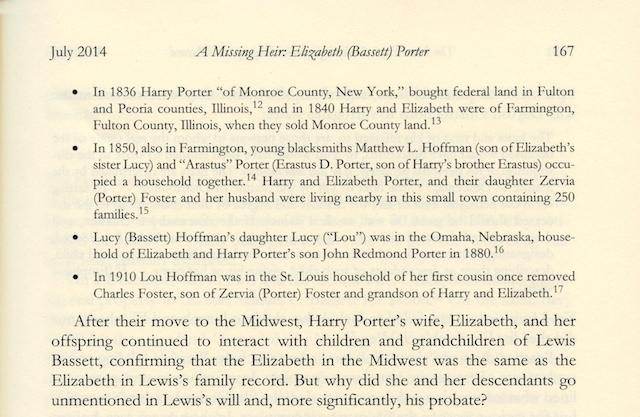 The evidence is all direct. There are no conflicts. We can accept that Elizabeth of two different places was the same woman.

[2] Harold A. Henderson, “A Missing Heir: Reconnecting Elizabeth (Bassett) Porter to Her Parents, Lewis and Dorcas (Hoxie) Bassett,” The New York Genealogical and Biographical Record 145 (July 2014): 165–84, on pp. 166–67. The article continues in subsequent issues. Reprinted with permission. Members of the New York Genealogical and Biographical Society can access the article online from the NYG&B home page > eLibrary Collections > The Record > Search “vol 145.”