SpringBoard is pleased to offer a review of this BCG Skillbuilding lecture, presented 3 May 2018.

T251, Jeanne Larzalere Bloom, CG®, “Valid and Unsound Assumptions: What Was She Thinking”

Board-certified genealogist Bloom got the audience’s attention when she started her presentation by describing a case in which her client had assumed the ages of her ancestral couple were about the same. However, it turned out that the husband was twenty years older than the wife and had previously been married. 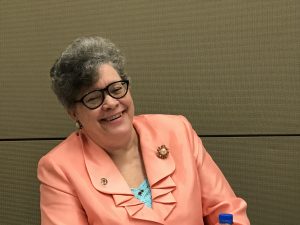 Bloom first discussed fundamental assumptions that are accepted as true— such as the fact that biological parents must be in the same location approximately nine months before the birth of the child.

She then discussed valid assumptions— those generally accepted as true unless there is convincing evidence to the contrary. For example, women must be between the ages of twelve and forty-nine to conceive, or the burial location on a death certificate must be correct.

Finally, unsound assumptions— those that may be valid, but they need supporting evidence to demonstrate their validity. Examples of these are marital statuses listed on the census as widow or widower, perhaps the status is correct, but it might also conceal an embarrassing divorce. Or finding the same family in the same location in two different censuses does not mean that they did not move during that decade, as they could have moved and then decided to return to their original home.

Not taking time to examine one’s assumptions can cause the researcher to come to the wrong conclusion or to embrace the wrong family.

Bloom finished by describing a case involving the Aiken/Larzalere/Worrell families and explained some of the assumptions involved.

Bloom’s presentation was both interesting and entertaining. Recommended!

A recording of this lecture may be ordered from Playback Now www.playbackngs.com.