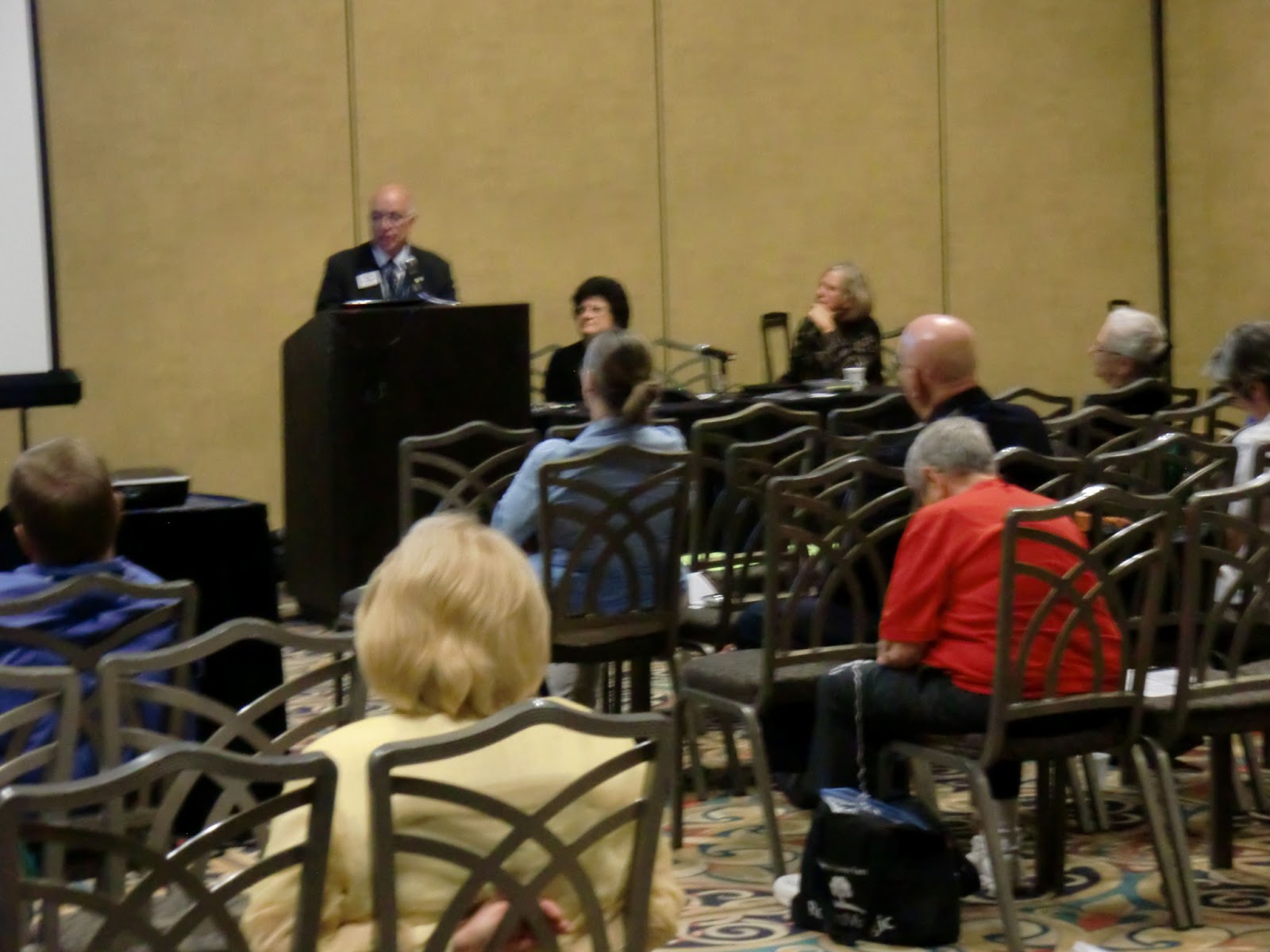 The Records Preservation and Access Committee had a busy two months since my last report. The committee has been actively engaged at both the federal and state levels responding to pressure on our ability to access records. Currently at the federal level, RPAC is dealing with Senate and House subcommittee hearings on bills to restrict access to the SSDI. In addition, several states have seen legislation to stringently restrict vital records access. Those states have reported their efforts to RPAC and in some cases asked for support.

At the National Genealogical Society’s 2013 conference, Jan Alpert, Jan Meisels Allen, and Fred Moss presented “RPAC Strategies in a Changing Environment: Fraud Protection v. Access.” The group presented a clear picture of the pressures currently faced by those seeking records access. As the photo above shows, there were empty seats. Not all genealogists recognize the need to work for records preservation and access. The few who do are willing to work hard to ensure access for all.

You can download the PowerPoint slides from this presentation by clicking on “RPAC NGS 2013 Las Vegas.” Jan Meisels Allen put together a PowerPoint slide show to explain how to monitor your own state’s legislative activity — just click on “Toolkit for State Liaisons–Jan Meisels Allen.” In addition, Jan Alpert updated the RPAC brochure; a printable copy is available here.

On Tuesday, 16 April 2013, the U.S. Senate’s Finance Committee had a hearing titled “Tax Fraud and Tax ID Theft: Moving Forward with Solutions.” The committee is chaired by Max Baucus (D-MT); Orrin Hatch (R-UT) is the ranking member. Written statements and added oral testimony showed that the IRS has made real progress in intercepting and investigating and prosecuting fraudulent returns. To view the full video of the hearing and statements by Baucus, Hatch, and the four witnesses go to the hearing website here.

On the whole, RPAC considered the hearing to be a step forward in federal understanding of the real issues involved in tax fraud. This includes the fact that the SSDI is used to prevent fraud rather than to instigate it. The blog posting, available here, describes the reasons for optimism as “[T]he IRS should eventually be able to statistically confirm that that vulnerability targeting the deceased has been closed.”

RPAC submitted written testimony that they support short-term (2 or 3 year) closure only if the following three categories are considered for access:

Jan Alpert reminded us that the last week in May is a scheduled recess for both houses of the U.S. Congress. She said that would be an excellent time to approach people in their local offices. Consider getting a small group of people together, including the president of the statewide genealogical society, a member of APG, and an accredited or Board-certified genealogist. Schedule a meeting with your legislator and convey the message that we care about access to the SSDI.

The unapproved 2011 Model Act and Regulations discussed in the March RPAC report: , have led to the introduction of legislation in many states. Several states are coping with closure legislation this Spring.

The Texas legislature is considering a bill that introduces the long records closure periods of the unapproved 2011 Model Act and Regulations. Members of the Texas genealogy community advocated for access in legislative hearings. See the report of the Texas State Genealogy Society here.

Oregon genealogists worked with other interested parties to eliminate restrictive closure clauses in HB 2093 during hearings April 10th before the Oregon House’s Health Care Committee and  May 9th before Oregon Senate’s Healthcare and Human Services Committee. The RPAC blog posting about the process is very informative.

Connecticut’s General Assembly considered bills generated out of concern for the tragedy in Newtown on December 14th. The gun control legislation instigated by that tragedy already passed. The town clerk of Newtown, however, has induced local legislators to introduce legislation to close death records. Currently all death and marriage records are open. Two new laws were reported out of committee favorably and await votes in the General Assembly’s House. The state medical examiner spoke passionately about the need to keep death records of children open; see the Hartford Courant coverage here. RPAC submitted a letter asking for this legislation to be reconsidered.

Please feel free to contact me if you have any questions or concerns about records access or preservation.

If You Don’t Care About Genealogy, Skip This Post

The Road to Better SSDI Access Goes Through All Fifty States