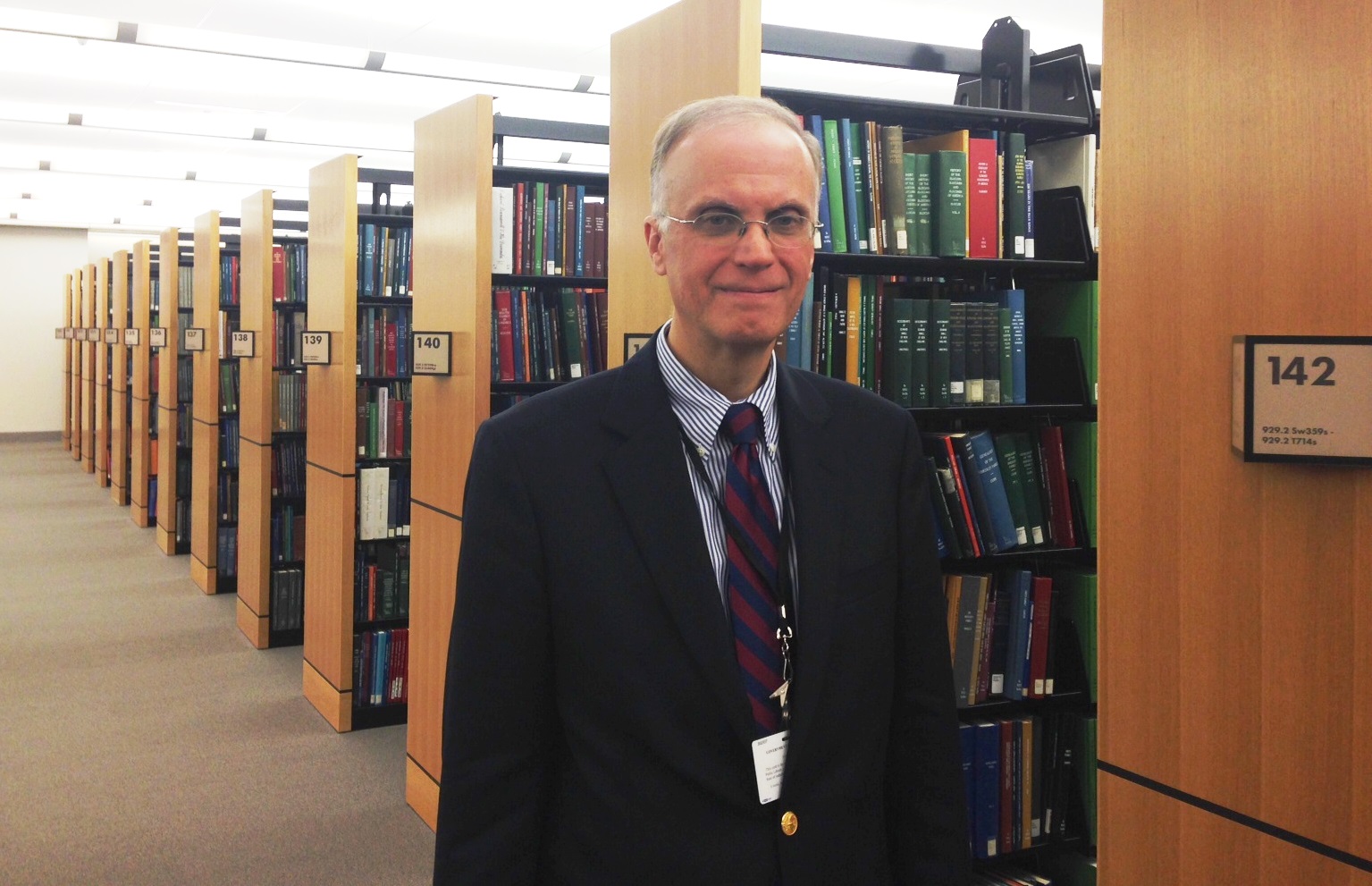 John Beatty, CG, in the stacks of the Allen County Public Library. Photograph by Dawne Slater-Putt, CG. Used with permission.

John D. Beatty, CG, of Fort Wayne recently became one of five Board-certified genealogists in Indiana. He is a reference librarian at The Genealogy Center of the Allen County Public Library (ACPL), an institution well-known for its second-largest genealogical research collection in the United States. John also serves The Genealogy Center as its bibliographer. He is the author of numerous genealogical articles and books, including Protestant Women’s Narratives of the Irish Rebellion of 1798, published by Four Courts Press of Dublin; and the two-volume James Beaty and Ann Bennett of Ballycanew, County Wexford, Ireland, and More than Two Centuries of Their American Descendants, which he self-published in 2010 and considers his magnum opus. He was also the editor and major contributor to volume 1 of the two-volume History of Fort Wayne & Allen County, Indiana, 1700-2005.

Through his work as bibliographer for The Genealogy Center since the 1990s, John has comprised a database of more than 65,000 titles ordered – but he was ordering books before the advent of that record, so he cannot cite the total number of volumes he has been responsible for adding to this great collection. His other duties include lecturing, delivering advice in one-on-one consultations, and – the primary work of all of the facilities’ librarians – helping Genealogy Center patrons with their research objectives. John also worked on the PERiodical Source Index prior to the establishment of a separate staff for that project.

John is a Michigan native and his BA and MA in History, as well as his MLS, are from the University of Michigan. He became interested in family history at a young age after hearing his grandparents tell interesting family stories and asking them about the people in the ancestral photographs and paintings hanging on the walls in their homes. He worked at the Bentley Historical Library at the University of Michigan while a student there and for a time afterward before coming on staff at what was then the Historical Genealogy Department of the Allen County Public Library in 1984. He has just celebrated his 30-year anniversary with The Genealogy Center. John said he has stayed on staff at ACPL because of the opportunity to work with talented colleagues and a great collection.

Always the historian, John lives with his wife, Amy, and their two children in a Tudor revival-style home in a historic neighborhood in Fort Wayne. He is an ardent vegan and enjoys cooking, gardening, and travel. He also serves as volunteer archivist for the Episcopal Diocese of Northern Indiana and served on various non-profit boards. His specific genealogical interests include the Colonial United States, Irish, German and Swiss research.