The William Walker–Margaret Lauderdale family has challenged us across the past three posts with several numbering complexities.

This post wraps up discussion of adoption and multiple partners.

Remember that we are looking at three numbers that would be used in a descending genealogy:

Parenthetical summaries of descent abbreviate each descendant’s ancestry. They appear after the descendant’s name in the first line of the biographical sketch, for example, “8.  Margaret Maitland2 Walker (Thomas Watta-1, WilliamA, ThomasB) was born . . .”

In the third and succeeding generations all the Walker descendants are American-born, so all have numerical generation numbers. Pre-American generation numbers (letters) appear only in the parenthetical summaries of descent. Likewise the descriptions we have used for Albert’s informal adoption and Edward’s treatment as a son of deceased William.

Margaret Maitland2 Walker’s daughter by an unknown father appears in Generation Three, although she has already been treated with her adoptive grandparents in Generation Two. Daughter Dorothy’s individual number (12) is not repeated here. She receives birth-order-number one ( i ) as Margaret’s firstborn.[1] Birth-order numbering of Margaret’s children with Louis Fox also begins with one ( i ) to distinguish the fathers.

Dorothy’s individual number is not repeated. The fathers of Margaret’s children are distinguished by the birth-order numbers.

The informal adoption of Albert Walker and his social Walker ancestry now appear in his parenthetical summary of descent.  Notice that although his children are in the third generation from WilliamA, their generation number is 2, not 3, because of adoptive son Albert’s generation number of 1. 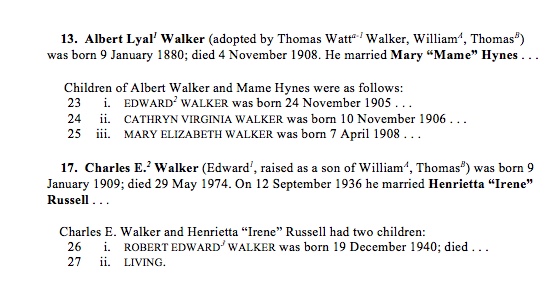 What unique numbering questions have you encountered in your family? How have you used Numbering Your Genealogy to answer them?