Harold Henderson, CG: Analyze or Else!

Harold Henderson, CG: Analyze or Else!

SpringBoard is pleased to offer a post by guest blogger Harold Henderson, CG. Harold has been a professional writer since 1979, a professional genealogist since 2009, and a Board-certified genealogist since June 2012. He lives and works in northwest Indiana, serves as a trustee of the Board for Certification of Genealogists, and has published in National Genealogical Society Quarterly (NGSQ), New England Historical and Genealogical Register, New York Genealogical and Biographical Record, and elsewhere. His website is midwestroots.net.

Genealogists who meet standards do so in part by asking pointed, even impolite, questions about every document and piece of information they see. It’s called analysis. Genealogists who don’t meet standards do so by trusting everything they see, and not asking questions. And anyone who is still this trusting is not ready to apply for certification.

As ambitious genealogists, we need to know how to analyze sources. We need to do it all the time—and we need to feel queasy when we don’t. The example that follows involves no difficult problem, requires no unusual skill, and would not normally appear in a peer-reviewed genealogy journal. It shows the pitfalls of trusting the first source we find and the benefits of carefully analyzing all information from all sources. 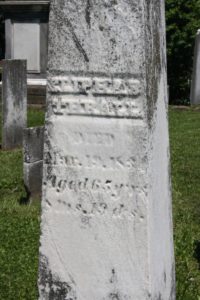 Recently I wanted to document Eliphas Thrall’s birth date. His grave marker in Ohio gives his death date (19 March 1834) and his age at death (65 years, 8 months, 19 days).[1] This information does not determine a single definite birth date. Different methods of subtracting produce slightly different birth dates for Eliphas, between 28 and 30 June 1768.[2]

Case closed? No. I did not ask myself, “Is this true or false?” And if I had it wouldn’t have helped much. Sometimes grave markers and statements of age are mistaken, and sometimes they aren’t. I had to get down to a deeper level and consider the factors that would make the birth date more likely to be one or the other.

Whoever provided the information for the marker probably was not present for Eliphas’s birth in New England, and probably knew Eliphas’s birth date only by hearsay. That person might also have taken Eliphas’s supposed birth date and gone through a complex calculation, filled with chances of error, to figure his age at death. Could I find a way to get information about the birth that is closer in time to the event, more likely to come from an eyewitness?

I knew the family came from Connecticut and had lived in western Massachusetts. The published vital records of Granville, Massachusetts, give Eliphas’s birth date as 23 June 1767—more than a year earlier than the calculated dates from the grave marker.[3] 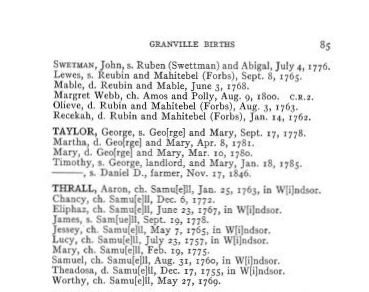 Case closed? Not. The book was published in 1914. Some conscientious twentieth-century person read through the Granville birth records (or a copy), and summarized them. Then they were typeset. That leaves plenty of chances for mistakes. So this handy, easily read published list is a derivative source. What do I do with a derivative source? Try to find what it’s derived from.

Do the original birth records for Granville survive from around 1767? Not only do they survive, they’re on line.[4] 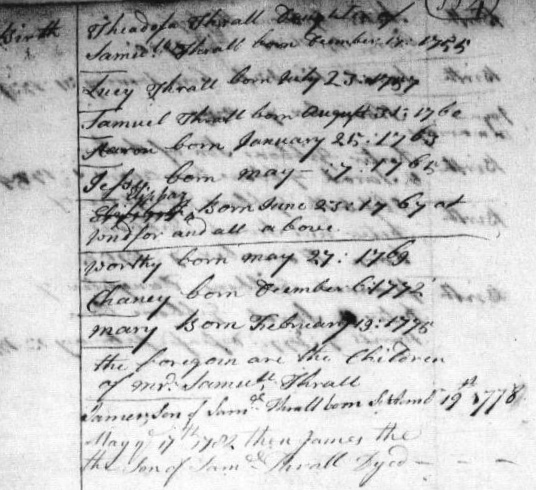 The 1914 summarizer didn’t make any mistakes that I can see, but some information was lost in the process. The original lists the children in chronological order with a note in the middle making it easier to see that Eliphas was the last child born in Windsor, Connecticut, and his brother, two years later, was the first in the family to be born in Granville, Massachusetts. The handwriting also enables me to see that the entire list down to James was written in the same hand and with the same pen, no doubt at the same time—after the birth of Mary in 1775 and before the birth of James in 1778, which is in a different hand. So now I know that Eliphas’s birth date was written down, perhaps at the dictation of his father, between those two dates, before Eliphas had grown up.

Looking at the adjoining pages suggests that some of the top-of-page entries like the Thralls’ may have been made in sequence in the 1770s, with space left on the lower part of each page for additional children. Evidently in time a clerk went back and saved paper by filling the blank spaces with later entries.

What did my questions get me? Higher-quality evidence than I would have had if I had settled for the grave marker or the 1914 publication. The Granville record is not contemporaneous with Eliphas’s birth, but it is as close as I have been able to come so far. The Granville informant was much more likely to have been around when Eliphas was born than the tombstone informant. So unless and until new evidence appears to corroborate either 28–30 June 1768 or 23 June 1767 (and it may appear as I follow Eliphas to Vermont and Ohio), the chance of the 1768 date being wrong is greater.

This chase would have been worthwhile even if all three sources agreed right down to the day. The point is to look as hard as we can—and in genealogy that does not mean staring at the page until our eyes cross. It means recognizing that there are more questions to be asked and often more and better records to find.

Analysis is not a frill—and not always this straightforward. It is at the heart of what we do.

CG and Certified Genealogist are service marks of the Board for Certification of Genealogists, used under license by Board-certified genealogists after periodic competency evaluation, and the board name is registered in the US Patent & Trademark Office.