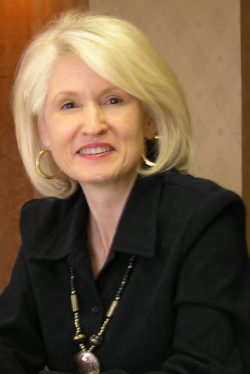 Elizabeth Shown Mills, one of the world’s best-known genealogists, is a Mississippi native who earned her degree in Southern and Family History at the University of Alabama, has authored or edited sixteen books and more than 1,000 articles, delivered over 1,000 lectures, and appeared on multiple radio and television networks. She regularly consults as a genealogical expert in national and international media.

In 1981 the American Society of Genealogists (ASG) elected her a fellow, recognizing her scholarship in published works. She served ASG in various executive positions including President. She was named a fellow of the National Genealogical Society (1989) and the Utah Genealogical Association (1990). The Association of Professional Genealogists honored her with the first Professional Achievement Award (2007) and Lifetime Membership (2016).

As an author and editor, her publications annually reach thousands of genealogists in print and across multiple platforms. They include ground-breaking works on evidence analysis and problem-solving strategies, classic references on professional genealogy, and insightful probes of Southern culture. Mills edited the peer-reviewed NGS Quarterly for sixteen years (1987―2002), fourteen of which she coedited with her late husband, Gary B. Mills, PhD. For thirty years she taught the Advanced Methodology track at Samford University’s Institute of Genealogical and Historical Research and for twelve years at the National Institute on Genealogical Research at the National Archives.

Since earning the CG credential in 1976 and CGL in 1988, Mills has continuously served the BCG behind the scenes and publicly as a trustee and officer totaling twenty-seven years. She held the executive offices of President (1994–96), Vice President (1989–94), and Member at Large (1996–97).

Mills’s service to BCG has extended beyond the offices she held—notably in her roles as scholar and mentor. She led the movement to elevate the field of genealogy to an academic social science. Mills encourages new genealogists and seasoned associates to uphold genealogical standards, seek the best sources, assess their validity, and critically analyze the evidence to solve genealogical problems. Perhaps her most valuable contribution has been shaping the intellectual direction of the field through writing, editing, teaching, and modeling amity, generosity, inquiry, and integrity. Her decades of BCG service and resolute dedication to our field deserve recognition with the Donn Devine Award for Extraordinary Service to the Board for Certification of Genealogists.

The Donn Devine Award was presented to Elizabeth Shown Mills on 10 May 2019.